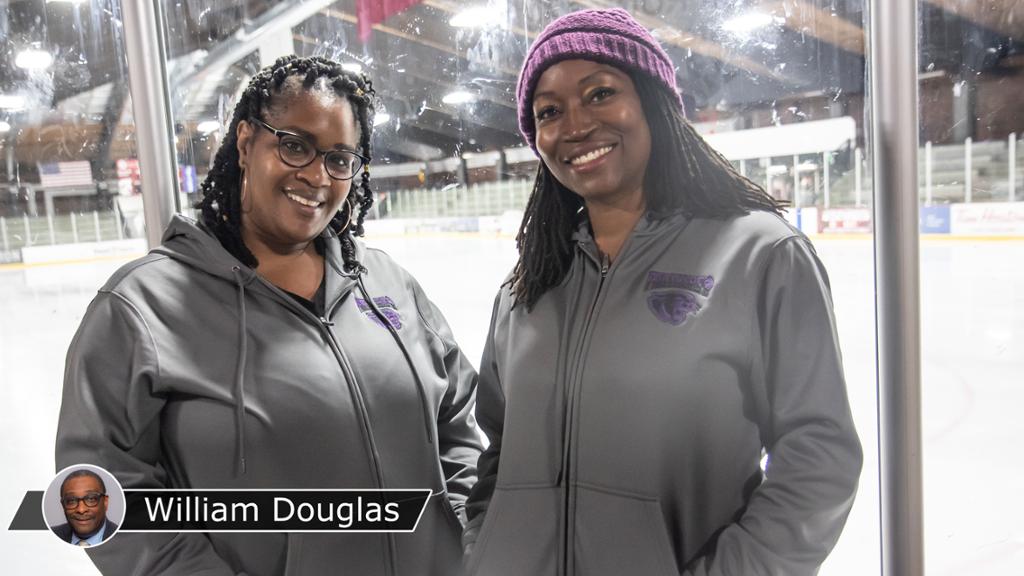 William Douglas has been writing the blog The Color of Hockey since 2012. Douglas joined NHL.com in 2019 and writes about people of color in sports. Today, he profiles the Black Hockey Mommies, a support network of black moms whose sons and daughters play the sport.

The Black Hockey Mommies started out as a club of two.

Rochelle Popyon and April Scott are two Northern California hockey moms who ran into each other at their sons’ games and tournaments, often the only black parents in the stands.

They created the Black Hockey Mommies Facebook Page on January 21, 2019 — Martin Luther King Jr. Day — as a venue where mothers could celebrate and feel compassion for a son or daughter’s triumphs and challenges in a predominantly white sport.

“When we started, it was just her and me,” Scott said. “Every time I went to a tournament and I saw another black family, I’d say, ‘Hey, you on Facebook? Join our group.'”

Popyon and Scott said they were happy when membership reached 25 and surprised when the number continued to grow.

Today, the Black Hockey Mommies are 185 members strong, a support network of women who share the positive and negative experiences of their children on the ice or in the locker room and exchange tips and suggestions related to hockey on and off the ice.

“I don’t see many Black Hockey Mommies, we’re very few,” said Meredith Lang, a Black Hockey Mommies member and co-founder of Minnesota Unbounded, a hockey program for girls of color. “For us to have a community that has continued to grow, and to try to navigate the system of hockey and what that entails, whether it be racism in hockey or whether it’s about finding out what the best equipment is. We can come to this group from A to Z and feel supported.”

And it’s a group where black hockey moms dream and work to make them come true. Popyon and Scott had long discussed the idea of ​​forming an all-black team to compete in an elite-level tournament.

“In the Facebook group we just asked the question, ‘We have an 18U tournament, we have set up a tournament team, who’s in?'” said Popyon.

Based on the response, Popyon and Scott joined a team in the Minnesota Showcase Hockey Summer Showdown in Richfield, Minnesota, in June.

The roster slowly came together, starting with Popyon and Scott’s 16-year-old sons, defender Gibran Popyon II and forward Leon Garrett III. The mothers recruited 15 other players from eight states from California to New York to participate in the tournament. The Panthers were born.

Popyon and Scott even recruited an all-black coaching staff led by Mike Weekley, a high school and youth hockey coach in Los Angeles. Anthony Walsh, who was a forward on the Edina High School hockey team that won the Minnesota Class 2A Championship in 2013, and Gibran Popyon Sr. were his assistants.

“For them to come together and maintain a support system that was meant for positive things for their children and to manifest that in this idea of ​​’let’s just get a team of young brothers together and get a coach,’ that is not easy,” Weekly said. “There are a lot of black people who play hockey, but to find them, to be age appropriate, to be skillful and then find the coaching staff to do it? That says a lot about those moms and how deep they be connected .”

They had an important connection to Minnesota in Lang, who was a finalist for the 2022 Willie O’Ree Community Hero Award.

She helped book Ice Age for the Panthers, put them in touch with a jersey maker, and helped arrange a tour of Minnesota Wild’s facilities.

“To make sure they can grab players from all over the country and bring them to Minnesota for the tournament, I just wanted it to be something they could never forget,” Lang said.

The Panthers went 1-2-1 in the tournament. But the players and coaches emerged as winners from the valuable bonding experience.

“From day one when we got there, you’d think these kids had known each other for years,” Scott said. “They just bonded. It was great.”

After hosting their first tournament team, Popyon and Scott said the Black Hockey Mommies are already planning to do it again.

“We want to grow the Black Hockey Mommies group and also the Panthers,” Popyon said. “If we can have more tournament teams in the future it might not be the near future, and certainly more divisions for the Panther team. I know all levels would benefit from the experience like we had in Minnesota.”