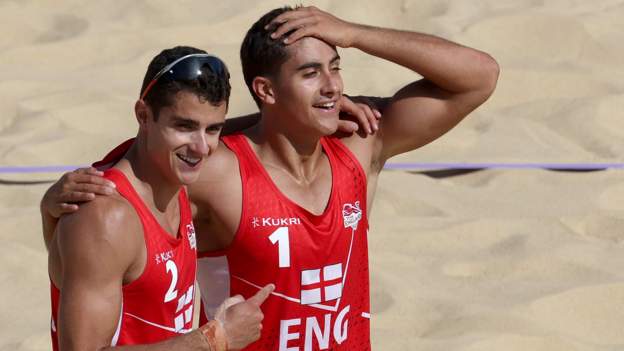 The Bellos won 21-11 21-12 in their bronze medal game against Olivier Ntagengwa and Venuste Gatsinzi from Rwanda.

Birmingham’s Smithfield erupted as they won with their second match point.

“It sounds great, we are proud of the work we have done. It is one family, one team, one volleyball community and one country – we are so happy,” said Javier.

The twins were born in Madrid and started playing volleyball when they were six, but moved to London at the age of 10.

They won gold for England at the 2017 Commonwealth Youth Games before claiming the first World Tour medal for a British men’s team with bronze in 2019.

The pair topped that feat by taking World Tour gold in Portugal last year and warmed up for the Commonwealths by winning the NEVZA Beach Championships in June.

Outside of the beach volleyball court, Javier holds a degree in politics, philosophy and economics from Royal Holloway University, while Joaquin studies medicine at Imperial College.

A series of fantastic performances in Birmingham captured the imagination of the home fans, creating a lot of noise in a boisterous atmosphere with music and dancers providing entertainment throughout the match.

The Bellos missed out on a guaranteed medal after losing to Canada in the semifinals on Saturday, but responded with a quality performance against their Rwandan opponents to deliver bronze on Sunday.

“We’ve had so many ups and downs all week. We hope we made our family and our country proud,” said Joaquin.

“It’s the achievement of my entire life.”